The median Phi_st that we estimated in the Indo-Pacific fall right in line with what Robin Waples reported from his review of the literature over 20 years ago in his influential “Separating the Wheat From the Chaff” paper: right around 0.02. Waples’ persistent point was that with such low values of F_st, the noise from sampling error will often drown out the signal. Traditionally, without reliable estimates of F_st, we are unable to resolve either the number of populations or how much gene flow occurs between them. This is certainly what we experienced in the paper I discussed in my last post. It arises because marine metapopulations occupy a portion of population genetic parameter space with large effective population size and high gene flow (Figure 1, from Gagnaire et al. 2015) This problem has plagued marine population genetics for so long that I think many have given up and/or are looking for structure at adaptive loci.

Population delimitation is not just a problem in marine species. In 2006, Robin Waples and Oscar Gaggiotti addressed the the question of “What is a population?”. The suggested several criteria based on the exchange of individuals between populations: either less than 1,5 or 25 effective migrants per generation, or under the ecological paradigm, the fraction of migrants, m < 0.1. They simulated data from an island metapopulation and then tested several different methods for their ability to distinguish population structure. However, they didn’t simulate into the Waples Zone. The largest simulated population size was 500 effective individuals. 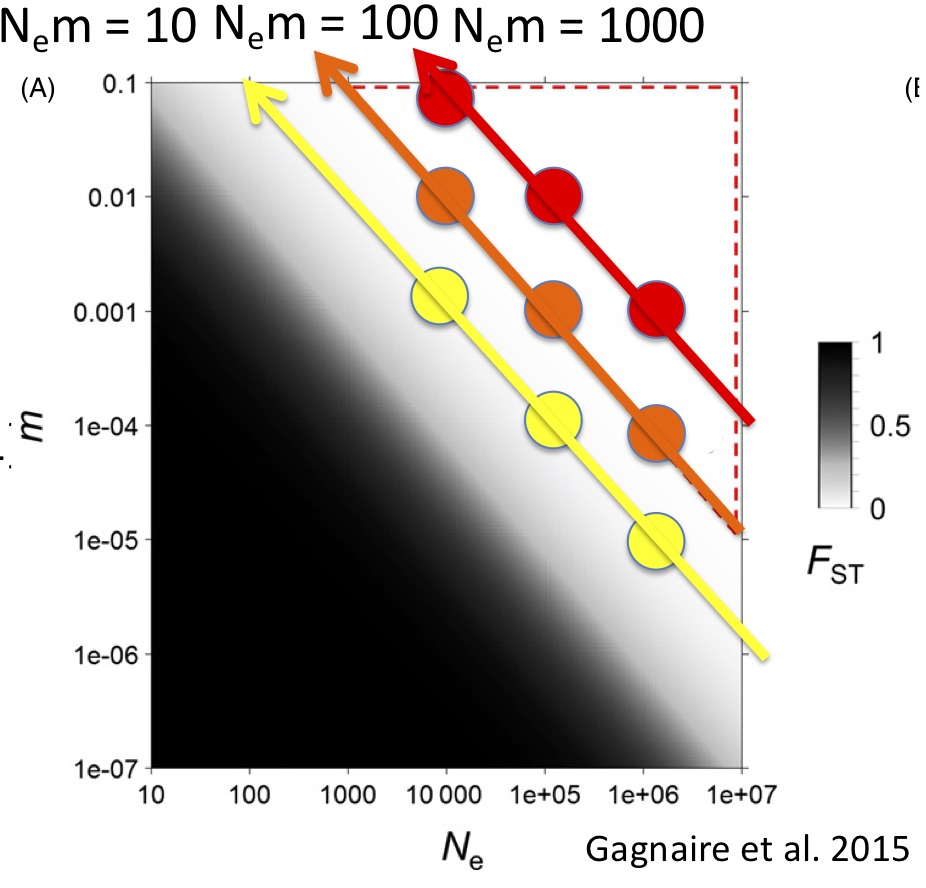 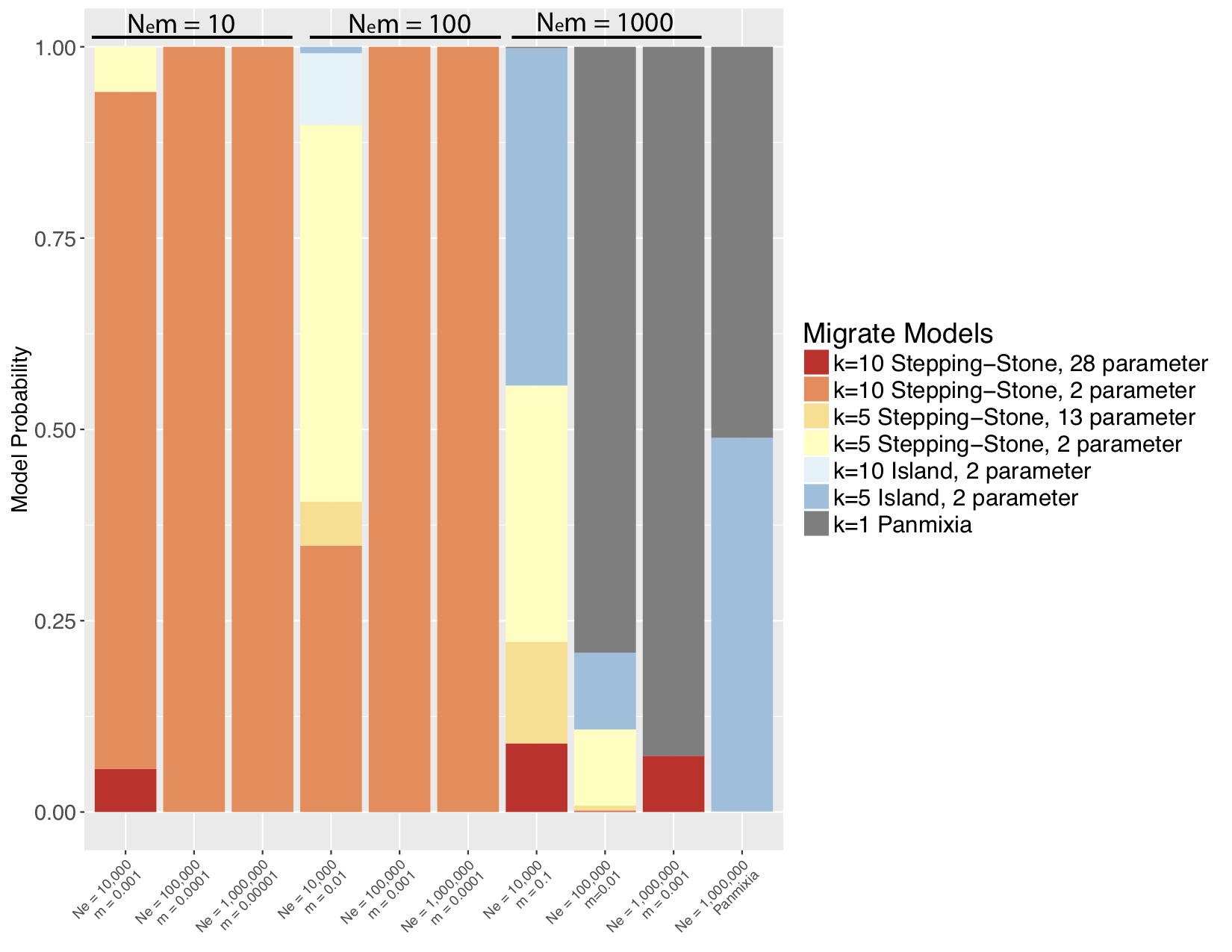 I was lucky to be invited to apply this approach to some DIPnet data from the ToBo lab at the Hawaii Institute of Marine Biology. I used migrate-n to consider basically the same set of models as the simulations for 41 marine species sampled along the Hawaiian archipelago ranging from limpets to dolphins. Along a long linear archipelago, one would expect some sort of stepping-stone/IBD model to apply, but Kim Selkoe had only found evidence for such a model in 4/41 species using F-statistics. With the migrate-n analysis, while 15/41 species were ambiguous, 18 of the remaining 26 selected the full stepping-stone model with free parameters (figure 3)! 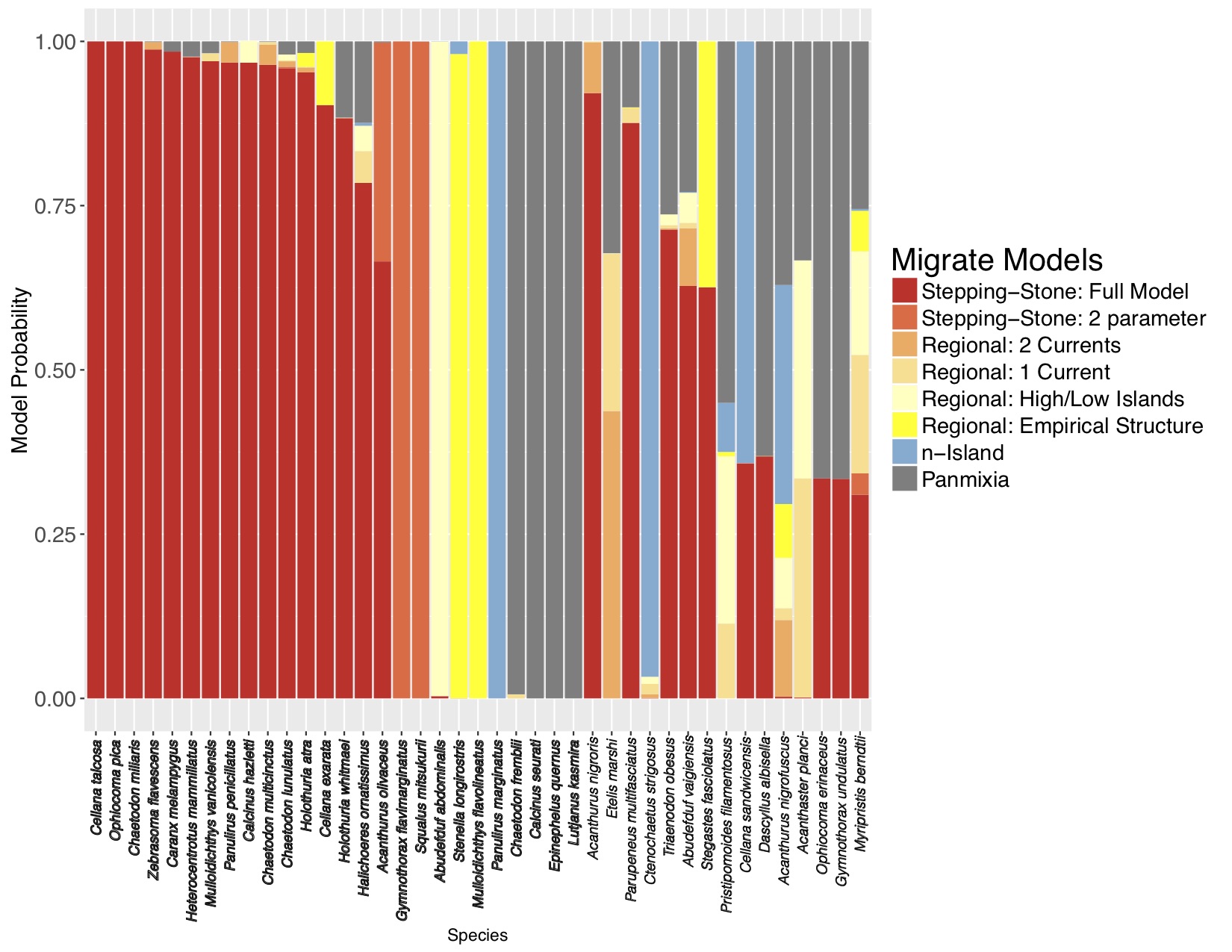 Two things about this result:

Waples RS, Gaggiotti O. 2006. What is a population? An empirical evaluation of some genetic methods for identifying the number of gene pools and their degree of connectivity. Mol Ecol 15:1419–1439.