How we ran the Evolving Seas RCN

Our RCN funded over a 100 new collaborations among marine biologists, non-marine evolutionary biologists, and oceanographers. Collaborations were funded through working groups and junior professional development exchanges. Despite the pandemic, 9 of the 11 working groups in our RCN produced published papers, websites, or other products. We trained and educated dozens of participants each year through coordinated readings, and over 80 diverse junior academics through our Virtual Lab Meeting Training Program. We produced a Special Feature on Evolving Seas published in Proceedings of the Royal Society, 3 websites on genomic data analysis and education, and more publications are in prep. 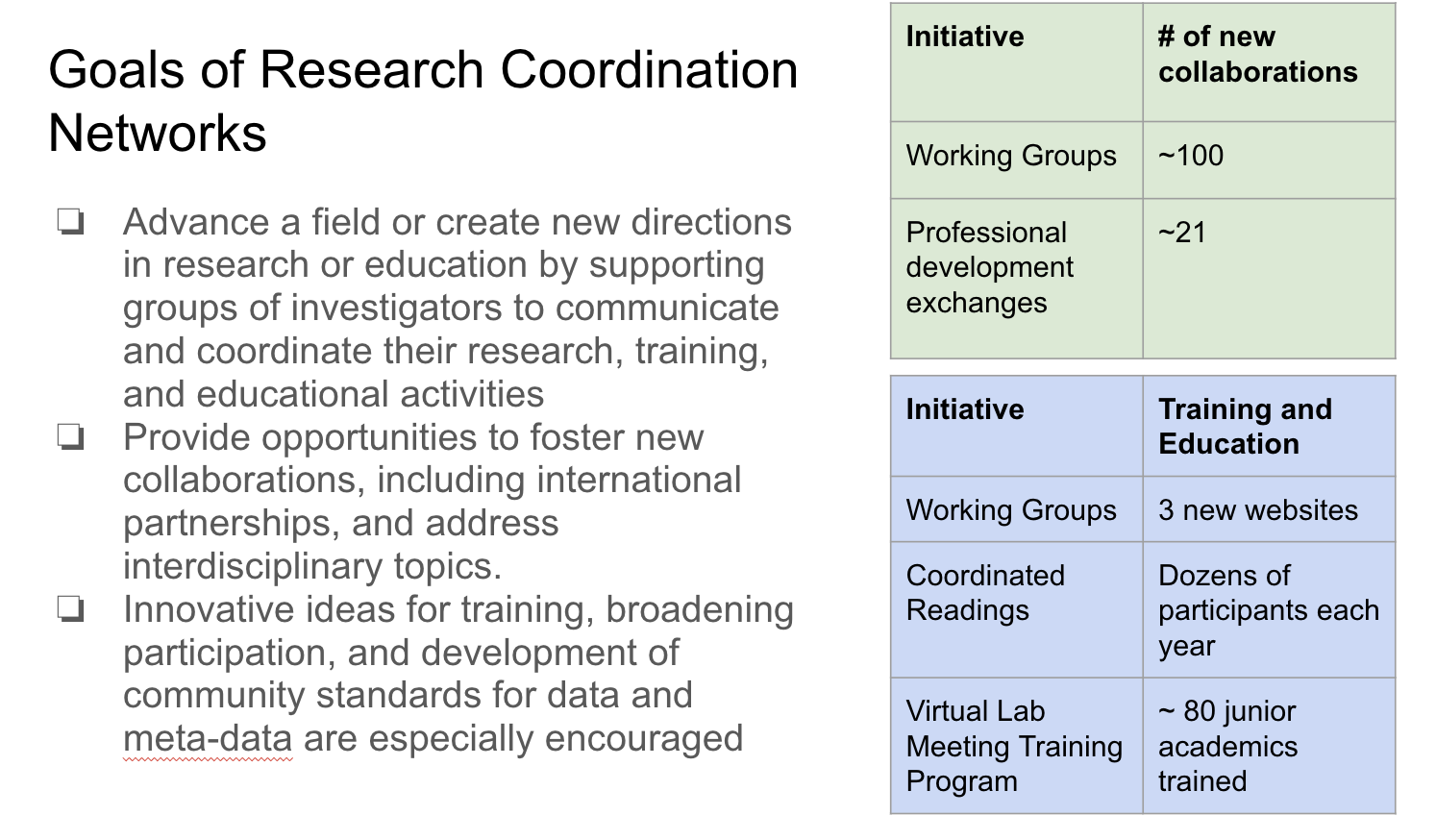 Here is an overview of what worked well for our RCN and some tips for running/managing a network.

The figure below shows a timeline of events. The COVID-19 pandemic is shown with the red virus icons, and the Black Lives Matter summer of protests is shown with their icon. Due to the pandemic, we had to cancel a workshop and we needed 2 no cost extensions to extend the funds until we could bring people together in person. As you will see below, canceling the workshop freed up funds for stipends for junior members of the network to complete working group activities, which contributed to the success of the working groups. 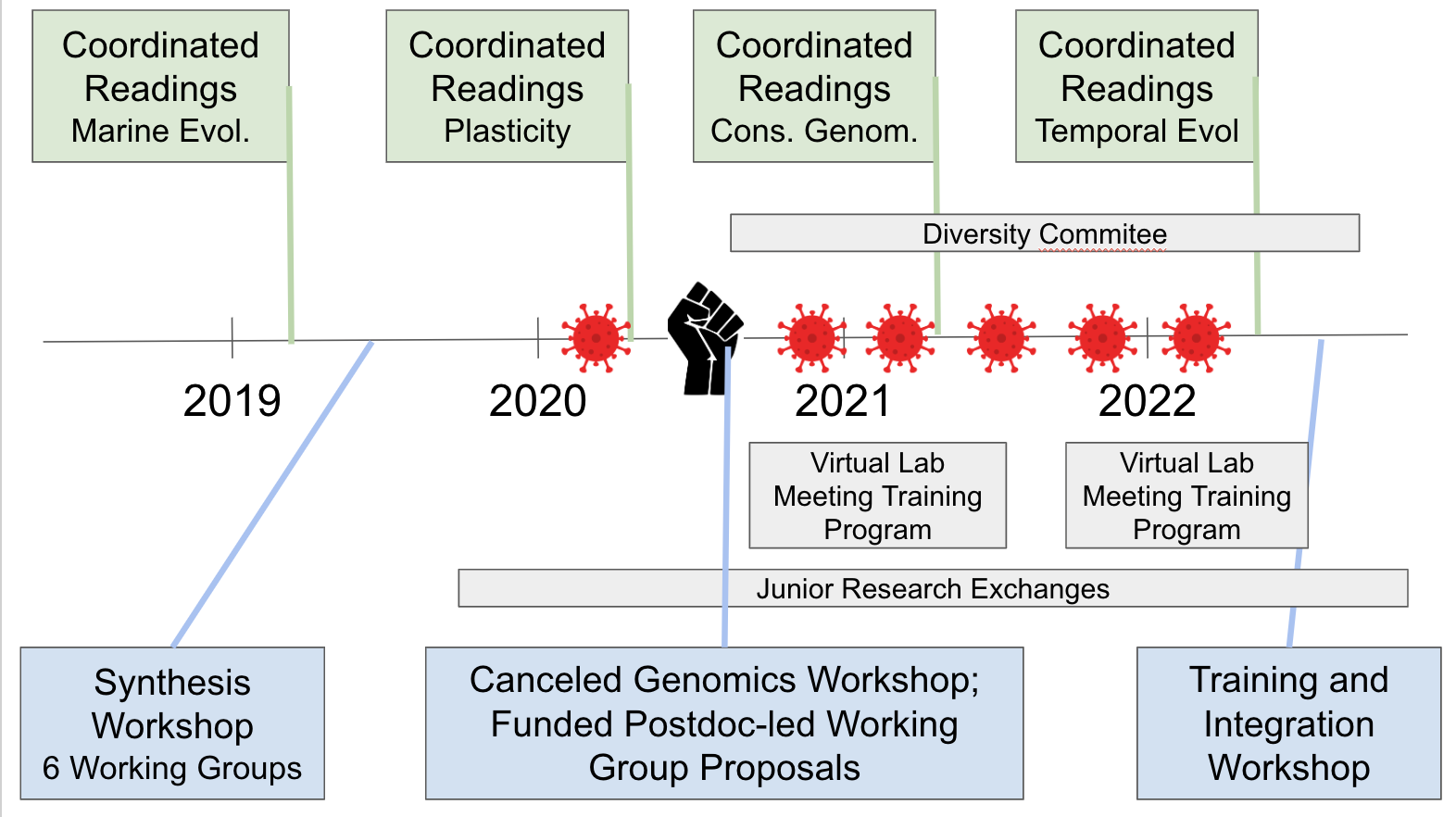 Overview of the first half of the RCN

Early in the RCN we formed a Steering Commitee and decided to have an open network. Anyone can become a member if they fill out a form, and anyone can send or receive updates by joining our ListServ. Although we have over 600 members, around 100-200 have been active participants. The Steering Committee helped to make plans and evaluate applications for various network activities.

In the winter of the first year of the RCN, we held a Coordinated Readings in anticipation of an upcoming workshop. These readings helped to develop a common knowledge base for our members and also allowed us to identify which members were serious about participating in the network.

In the summer at the end of the first year, we held a “Synthesis Workshop” to which we invited senior personnel in addition to open applications. The goal of this workshop was to synthesize existing knowledge and identify knowledge gaps at the intersection of marine science and evolutionary biology. We used the Open Space workshop format successfully, which is a model used by NESCent Hackathons (Stoltzfus et al. 2017). Open Spaceis a participant-driven way to run productive meetings, for five to 2000+ people (www.openspaceworld.org). The Open Space framework for a conference or workshop results in self-organized groups focused on a specific and important purpose or task, but beginning without any formal agenda beyond the overall purpose or theme. At the end of this workshop, 6 working groups had been formed.

In the second year of the RCN, we decided to continue with the Coordinated Readings as they were popular. Some labs from overseas also participated in these. We developed a system for a small group of people to put together the readings by December, with readings running bi-weekly from Jan to May. Organizers could earn a small stipend. We set up a Slack Channel for groups to share their discussions and motivate other groups. We requested proposals from graduate students and postdocs for professional development exchanges and planned a Genomics Workshop. We proposed and were granted a special feature on Evolution in Changing Seas, to which we planned to publish manuscripts from the Synthesis Working Groups. To be as inclusive as possible, we also sent out a request to the network for papers to include in the special feature and had some great responses.

Then the pandemic hit, and we had to cancel the Genomics Workshop rethink how to spend funds we had budgeted for that workshop. We repurposed some funds to pay stipends to junior members of the existing working groups, which helped to lead to their success. We decided to solicit proposals for postdoc-led working groups in the area of Genomics. Proposals had to include 1 or more faculty mentors and up to a $10000 a budget for paying stipends to junior members of the group for activities. The decision to have postdocs as leaders came from the concensus that professors were too busy, and that postdocs could elevate their career by a taking leadership role.

Paying stipends to junior members of the network who contributed to working group activities helped lead these working groups to finished products during the pandemic. In traditional working group models, funds are used to bring people together in person, with no stipends for continued work after the meeting. We’re not sure the working groups would have been as successful under this traditional model.

Also, having a special feature planned with deadlines helped to keep the first set of working groups on task.

As we transitioned into the third year of the RCN, the Black Lives Matter movement and general disgust with discrimination in society led us to form a Diversity Committee. In the future this is a committee we recommend forming in the first year if possible, although it may not be possible given the large amount of work in getting an RCN set up. The Diversity Committee wanted to set up a program that would increase diversity in our network and create new connections among network members without taking up anyone’s time. We came up with the Virtual Lab Meeting Training Program. This program matched junior academics with labs. The junior person could earn a $500 stipend for attending 10 lab meetings and leading discussions for part of at least 2 lab meetings.

We have a lot of data that indicates that the Virtual Lab Meeting Training Program was extremely successful at training junior academics, increasing diversity of our network, and bringing a new perspective to established labs. We hope to publish this data. A few things to note: many participants said that the stipend was important to them for making the time to finish the program. Survey respondents who rated the program lower noted that they weren’t matched with a lab who shared their interests. On the other hand, some survey respondents who were matched with a lab that they didn’t request said that they benefitted greatly from the program and it helped to accelerate their research.

Overview of the second half of the RCN

We continued to support working groups through stipends, the Coordinated Readings, and the Virtual Lab meeting training program in each year.

In the 4th year of Coordinated Readings, we had a high rate of people checking the Slack Channel for discussions and a low rate of people posting their discussions (data below). From talking to junior members, they were self-conscious about posting their discussions on the channel. We talked about this dynamic at our final in-person workshop, and we’re currently brainstorming ways to encourage postings on the Slack Channel. Junior folks loved to read the posts but were reluctant to post themselves. 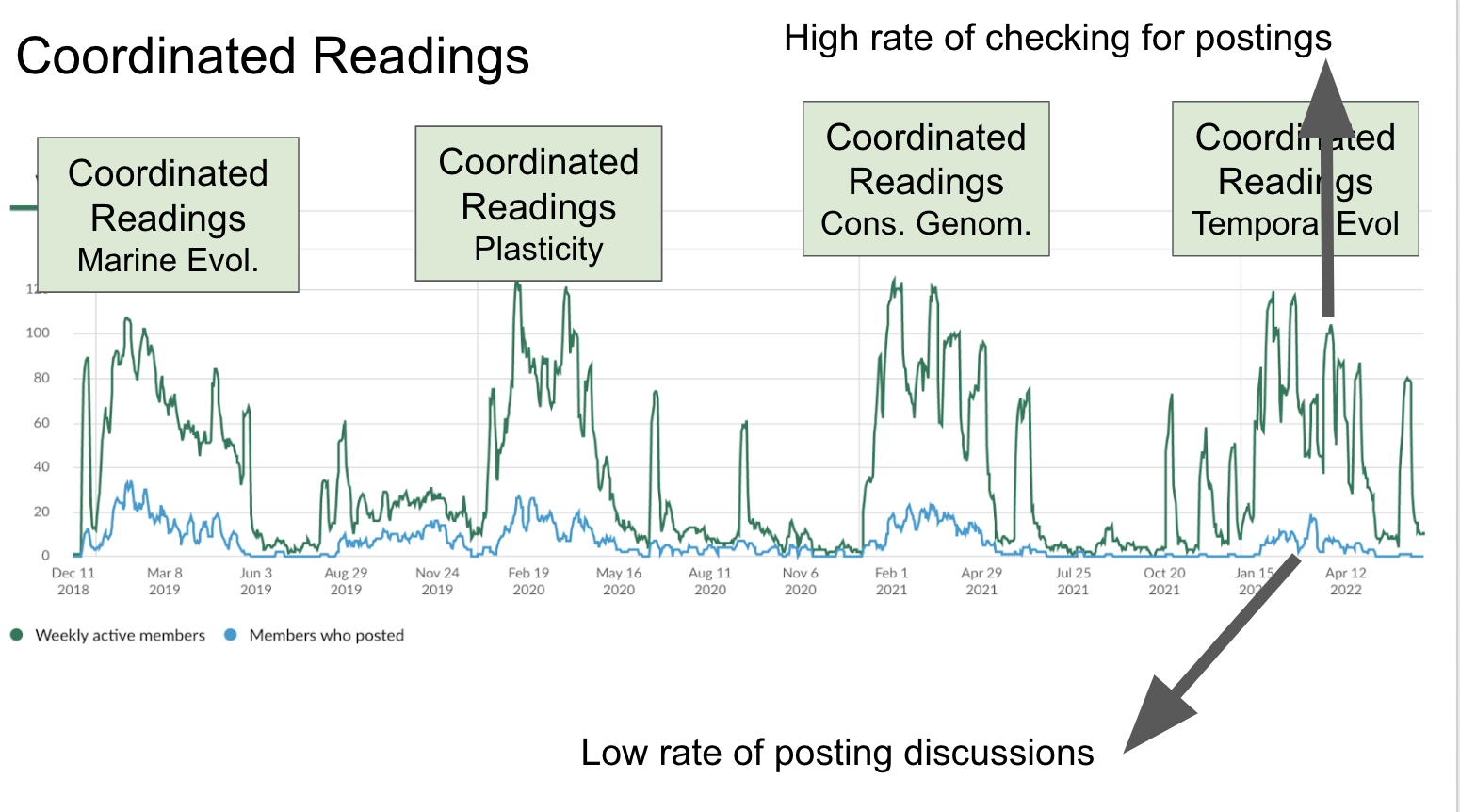 We finished up the RCN with a “Training and Integration Workshop”, which was a about 65% junior (undergrad/grad/postdoc) and 35% senior folks. Most of the junior people who attended had already been engaged in the workshop through coordinated readings and the Virtual Lab Meeting Training Program. At this hybrid workshop we had all the working groups present results from their activities, which generated a lot of excitement and created new linkages among working groups. We also had a number of junior people sign up to lead RCN activities (Virtual Lab Meeting Training Program, Coordinated Readings) over the next year.

Tips for running an RCN